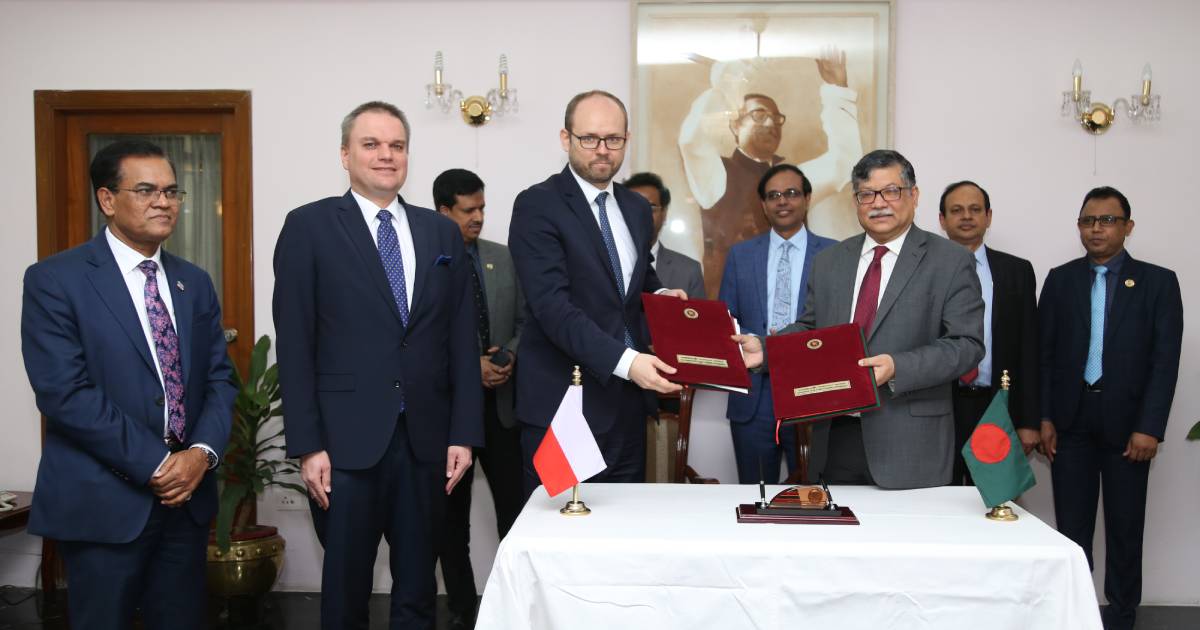 Foreign Minister Dr AK Abdul Momen has urged the Polish government to encourage their investors and entrepreneurs to look to invest in Bangladesh, particularly drawing their attention to the shipbuilding, agricultural, food processing and energy sectors, as well as the blue economy.

Momen discussed the bilateral issues including investment potential during a meeting with Deputy Foreign Minister of Poland Marcin Przydacz here on Wednesday.

During this meeting, the foreign minister mentioned that under the able leadership of Prime Minister Sheikh Hasina, Bangladesh is making remarkable socio-economic progress in every sector to realize the dream of the Father of the Nation Bangabandhu Sheikh Mujibur Rahman.

He emphasized the exchange of high-level visits between the two countries.

Polish Deputy Minister Przydacz, who concluded two-day visit to Bangladesh on Wednesday, assured that Poland is eager to continue cooperation with Bangladesh.

He informed that the Polish government is considering the option of opening an embassy in Dhaka.

Before that, bilateral consultations between Bangladesh and Poland took place at the State Guest House Meghna.

The Polish delegation was led by Deputy Foreign Minister Marcin Przydacz and Bangladesh side was led by Foreign Secretary Masud Bin Momen.

The two sides reviewed the progress made in different areas of cooperation in the past and discussed the future course of cooperation.

During the consultations, Foreign Secretary thanked the government of Poland for their support during the War of Liberation in 1971.

He expressed satisfaction at the growing rate of bilateral trade between the two countries which reached USD 1.2 billion in the last fiscal year (2018-19) and urged both the sides to work together to increase bilateral trade and investment.

Foreign Secretary also urged the Polish government to encourage Polish investors and entrepreneurs to invest in Bangladesh in Hi-Tech Parks (HTPs) and Specialized Economic Zones (SEZs), according to the Ministry of Foreign Affairs here.

Polish Deputy Foreign Minister too pointed out that both Bangladesh and Poland can realize the huge potentials of bilateral trade and commerce.

He emphasized on enhanced business contacts in the form of exchange of visits of business delegations as well as those between Chambers of Commerce of the two countries.

Both sides agreed to increase trade and investment through various mechanism like setting up a joint committee, exchanging business delegations, and signing up instrument of cooperation, etc.

In addition to that, Bangladesh and Poland agreed to reinforce and establish cooperation in the sectors like education, culture, agriculture, energy and mining, science & technology, ICT, defence and blue economy.

Apart from bilateral issues, views on international and regional issues were exchanged during the meeting.

Both the Foreign Minister and Foreign Secretary thanked the Polish government for their continued support to Bangladesh on the Rohingya issue, and requested to further extend this support as a responsible member of the international community to ensure safe and dignified return of the Rohingyas to their homeland.