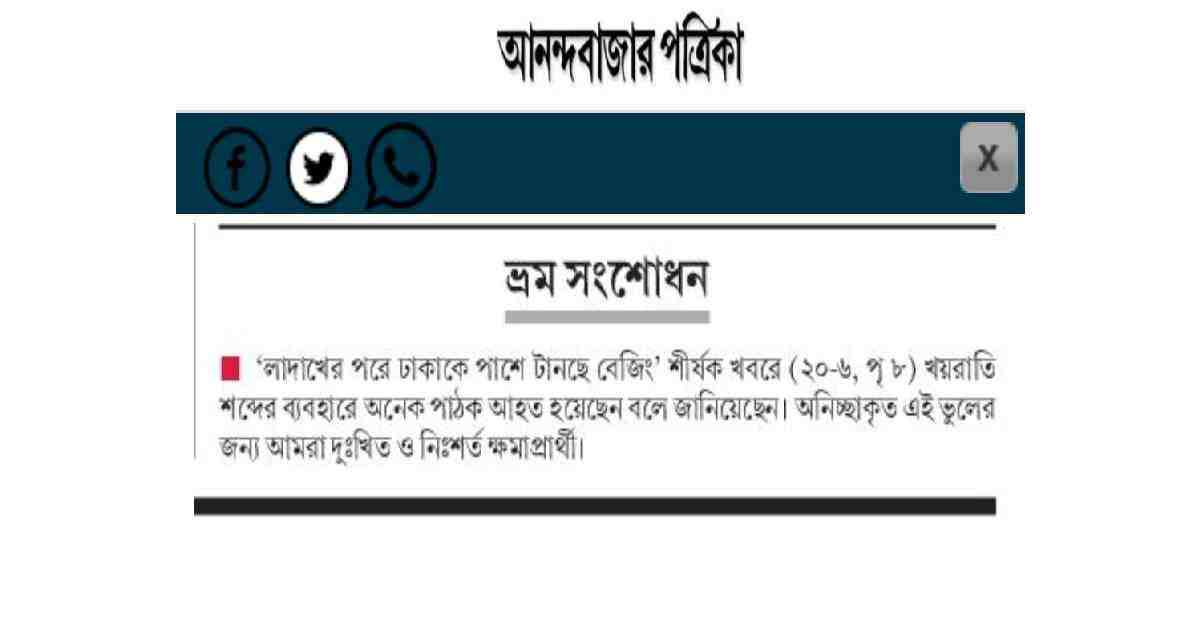 Indian daily Anandabazar Patrika has sought unconditional apology for using the word “khairati” in a recent report after China had granted more Bangladeshi products duty free access to its market.

The widely-read daily was hugely criticised and people came down heavily on the newspaper through social media platforms criticising such journalism.

“Many readers got hurt for using the word – Khairati.We are sorry and seek unconditional apology for this unintentional mistake,” said the newspaper.

Bangladesh maintains very good relations with both India and China.

With the announcement made by the State Council of Ministry of Finance of China, a total of 8,256 Bangladeshi products will come under the 97 percent of products that would be exempted from tariff.

Bangladesh described it as a success of its economic diplomacy.

“We are glad to inform that as part of our economic diplomacy and the consequent outcome of exchange of letters between Bangladesh and China, Tariff Commission of the State Council of Ministry of Finance of the People’s Republic of China issued a notice on granting zero treatment to 97 percent of tariff products of Bangladesh,” said an official at the Ministry of Foreign Affairs.

He said Bangladesh is getting this as an LDC .

This treatment is in addition to the preferential duties that we are already enjoying from China under Asia – Pacific Trade Agreement ( APTA ) .

This announcement opens doors for Bangladeshi exporters to enjoy zero tariff for 5,161 items to enter into Chinese markets from July 1.

“According to China’s commitment to zero tariff treatment for 97% of the tax products of the least developed countries that have established diplomatic relations with China,” said a notification issued on June 16 from the Ministry of Finance of China.

A clash high in the Himalayas between the world’s two most populated countries claimed the lives of 20 Indian soldiers in a border region that the two nuclear armed neighbors have disputed for decades, Indian officials said on June 16.

The clash in the Ladakh region June 15 — during which Indian officials said neither side fired any shots — was the first deadly confrontation between India and China since 1975.

Experts said it would be difficult for the two nations to ease heightened tensions.

The Indian and Chinese troops fought each other with fists and rocks, Indian officials said on condition of anonymity because they were not authorized to disclose the information.