`Bangladesh wants to contribute to betterment of global community` 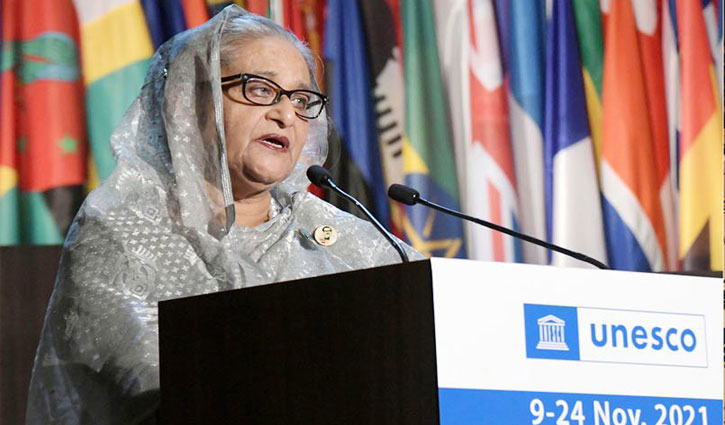 Prime Minister Sheikh Hasina today expressed Bangladesh’s desire to contribute to socio-economic development and technological advancement for the betterment of the global community.

Acknowledging the ‘kind support’ of the international community in the development of her country over the decades, she said, “We also wish to contribute to the socio-economic development and technological advancement for the betterment of the global community despite our limited capacity.”

The Prime Minister was addressing the UNESCO-Bangladesh Bangabandhu International Prize for the “Creative Economy” awarding ceremony at the UN body’s headquarters here.

“We believe that investment on the creative economy will result in realization of the collective aim of furthering socio-economic development and technological advancement,” she told the function.

The Prime Minister has announced the name of winner and handed over the prize and certificates to the recipient.

PM’s younger sister Sheikh Rehana was present on the dais.

Sheikh Hasina said she believes that establishing the UNESCO-Bangladesh Bangabandhu Sheikh Mujibur Rahman International Prize for the “Creative Economy” is the most befitting tribute to Bangabandhu’s contribution to the global humanity and peace.

She hoped that this international prize would strengthen the efforts of UNESCO (United Nations Educational, Scientific and Cultural Organization) in the field of the creative economy, further contributing towards its global priority, that is, gender equality and the priority for youth as a group.

UNESCO Director-General Audrey Azoulay, who received Sheikh Hasina with a flower bouquet on her arrival at the headquarters, delivered the welcome address at the function.

The Prime Minister said the UNESCO-Bangladesh Bangabandhu Sheikh Mujibur Rahman International Prize will surely create a knowledge-sharing mechanism by capturing, celebrating, and communicating the best practice in the development of creative entrepreneurship.

The Prime Minister conveyed her heartfelt appreciation and gratitude to the UNESCO personnel for their support in establishing the prize in the name of the Father of the Nation of Bangladesh which coincides with the International Year of Creative Economy for Sustainable Development declared by the United Nations.

“Bangladesh is privileged and honoured to join UNESCO’s effort in these areas of our priorities,” she added.

Sheikh Hasina expressed gratitude to UNESCO for recognizing the 7th March Speech of Bangabandhu by including the speech in the Memory of the World Register as a documentary heritage on October 30, 2017.

The Prime Minister told the global gathering that due to Bangabandhu’s visionary leadership and legacy, Bangladesh is so different today from what it was during the early years of independence.

She added that this year Bangladesh is celebrating the golden jubilee of its independence that coincides with the ‘Mujib Year’, the birth centenary of the Father of the Nation Bangabandhu Sheikh Mujibur Rahman and UNESCO is officially associated with the celebrations.