Germany players in `Human Rights` message ahead of WC qualifier 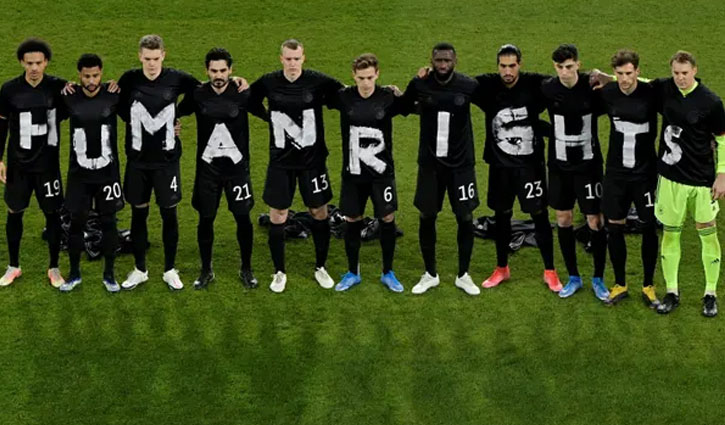 Germany’s national team lined up in T-shirts which spelled the message ‘Human Rights’ before their World Cup qualifier against Iceland on Thursday, less than two years before the finals are controversially staged in Qatar, reports wionews.

“We have the World Cup coming up and there will be discussions about it…. we wanted to show we are not ignoring that,” Leon Goretzka, who scored the opening goal in a 3-0 win, told RTL.

“We wrote the letters ourselves. We have a large reach – and we can use it to set an example for the values we want to stand for. That was clear.”

Joachim Loew’s German team echoed a similar demonstration from Norway, who on Wednesday donned T-shirts with the message ‘Human rights, on and off the pitch’ in support of migrant workers building World Cup venues in Qatar for the 2022 finals.

The gesture, before Norway’s World Cup qualifier against Gibraltar, came after several Norwegian clubs spoke out in favour of a boycott of the 2022 finals.

UK daily newspaper The Guardian recently claimed that more than 6,500 workers have died on stadium construction sites since the World Cup was awarded to Qatar in 2010.