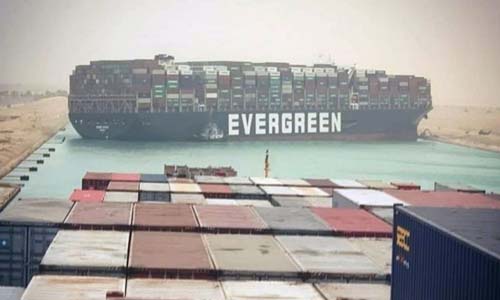 A huge container ship that has been stuck across the Suez Canal for almost a week has reportedly been freed.

The 400m-long (1,300ft) Ever Given has been straightened and released from the shoreline, officials said, reports BBC.

Video appeared to show the ship floating, but its owner later told AFP that it had only been “turned”.

The Ever Given has been blocking one of the world’s busiest trade routes, forcing companies to reroute ships and causing long tailbacks.

The reports that the ship had been freed raised hopes that traffic along the canal could resume within hours, clearing the way for an estimated $9.6bn (£7bn) of goods that is being held up each day.

Maritime services company Inchcape earlier said that the vessel had been freed from the shoreline.

The container ship’s course had been corrected by 80%, the Suez Canal Authority went on to explain. It added that efforts to fully refloat it had begun.

Traffic would resume once the ship can be moved to a waiting area, the authority said.

The 200,000-tonne Ever Given ran aground on Tuesday morning amid high winds and a sandstorm that affected visibility. Specialist salvage companies were brought in to help refloat the ship.

On Sunday, canal officials began preparing to remove some of roughly 20,000 containers on board in order to lighten the load.

About 12% of global trade passes through the 193km (120-mile) Suez Canal, which connects the Mediterranean Sea to the Red Sea and provides the shortest link between Asia and Europe.

An alternative route, around the Cape of Good Hope on the southern tip of Africa, can take two weeks longer.