Police to seek 7-day remand for Mamunul on Monday 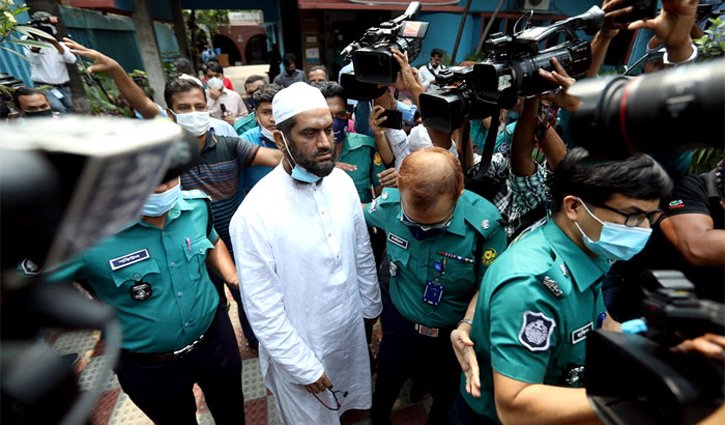 Hefazat-e-Islam’s joint secretary general Mamunul Huque is an accused in minimum 17 cases filed with different police stations in the capital.

Of the cases, 15 were filed following Hefazat’s mayhem at Motijheel’s Shapla Chattar on May 5, 2013. Police filed all these cases. Two other cases were filed at the Paltan and Mohammadpur police stations by a Jubo Leauge leader and another person respectively.

Meanwhile, police said on Sunday night that they would plead to place arrested Hefazat-e Islam’s joint secretary general Maulana Mamunul Huque on a seven-day remand for interrogation after producing him before a court in Dhaka on Monday (April 19).

OC Abdul Latif said: “We will plead to place Mamunul Huque on a seven-day remand producing him before a court tomorrow (Monday). An investigation was going on in a case related to vandalism and subversive acts filed at Mohammadpur police station in 2020. We have arrested Hefazat leader Mamunul Huque as we have found his involvement during the investigation of the case. Besides, there are complains against him at different police stations in the country.”

Earlier in the afternoon, police arrested Mamunul Huque from Jamiya Rahmania Madrasa at Mohammadpur in the capital. Detective branch members and riot police were deployed in the area during the arrest.

After the arrest, Mamunul was taken to Tejgaon Police Station for interrogation. Before that, he was taken to the Tejgaon deputy police commissioner’s office.

Following Mamunul’s arrest, Tegaon Division’s deputy commissioner Harun-ar-Rashid at a press briefing told journalists that Mamunul has been shown arrested in a case filed over vandalism at Mohammadpur in the capital in 2020. He would be produced before the court on Monday.

A source at Tejgaon police station said Mamunul is the No. 7 accused in a case file on March 7 last year with Mohammadpur police station. GM Alamgir Shahin, a resident of Chan Mia Housing of Mohammadpur, filed the case.