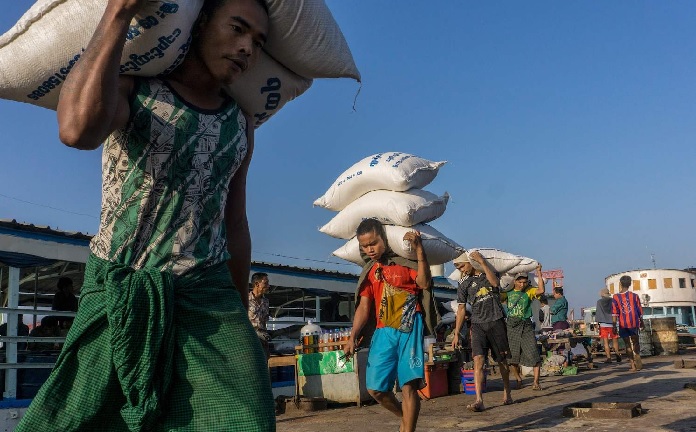 Myanmar still expects to export 2 million tonnes of rice this year, despite a warning from the World Food Programme (WFP) that millions of people in the strife-torn country may struggle to afford food over the next few months, report Bloomberg and Reuters.

Shipments of the grain fell about 35% in February through April from a year earlier, Myanmar Rice Federation president Ye Min Aung said in an interview with Bloomberg.

However, the country is still on track to export at least 2 million tonnes in the year through September, he said. Myanmar typically ships 2 to 3 million tonnes of rice offshore each year out of a total harvest of 14 to 15 million tonnes.

The country has been wracked by protests and deadly crackdowns by the armed forces since a military coup on Feb 1. Armed ethnic groups have been stepping up their offensives against the Tatmadaw, with Karen National Union (KNU) rebels seizing a military outpost near the Thai border this week in a sign that conflict will continue.

Thai and KNU officials said there were fresh air strikes and fighting on Friday.

The violence has caused alarm among civilians in the area, driving many to flee across a river border to seek safety in Thailand.

The World Bank has predicted Myanmar’s economy could shrink by 10% this year, while the United Nations WFP said the crisis “will severely undermine the ability” of the poorest people to put enough food on the table

Ye Min Aung said there was enough rice available for domestic consumption in Myanmar, but transport difficulties are making it harder for poor people to access it. Imported foods, such as edible oils, that Myanmar relies on are becoming more expensive due to a plunge in the kyat.

“Banking and finance, cash payments have become very difficult,” Ye Min Aung said. “Transport and logistics costs are very expensive and the availability of containers to load and export rice is becoming harder.”

China is the biggest buyer of Myanmar’s rice followed by Bangladesh and other Southeast Asian countries, he said. The country is trying to broaden its markets but global competition in the rice industry is very high, added.

Half of Myanmar’s population could be living in poverty by next year, driven by the combination of the pandemic and the political crisis sparked by the military coup, the UN warned on Friday.