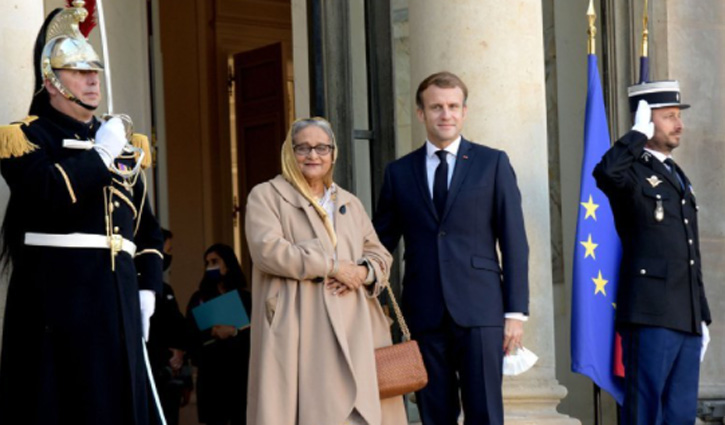 Prime Minister Sheikh Hasina was accorded a warm and rousing reception at Elysee Palace on the first day of her visit here on Tuesday (November 9).

French President Emmanuel Macron later received Sheikh Hasina. Then both the leaders went upstairs. They posed for photo sessions twice – during the reception and while going upstairs.

They went for luncheon meeting and tete-a-tete after making brief statements.

The Republican Guard later gave the Bangladesh premier the state guard of honour.

During her stay in Paris, Airbus CEO Guillaume Faury and Dassault Aviation president Eric Trappier, Thales president Patrice Caine will call on her at her place of residence on Wednesday.

She will have a meeting with the French business organization MEDEF’s high-profile delegate.

Later in the afternoon, she will visit the French Senate where she will receive an official reception during the ongoing Senate Session.

On November 11, Sheikh Hasina will attend the Paris Peace Forum._BSS