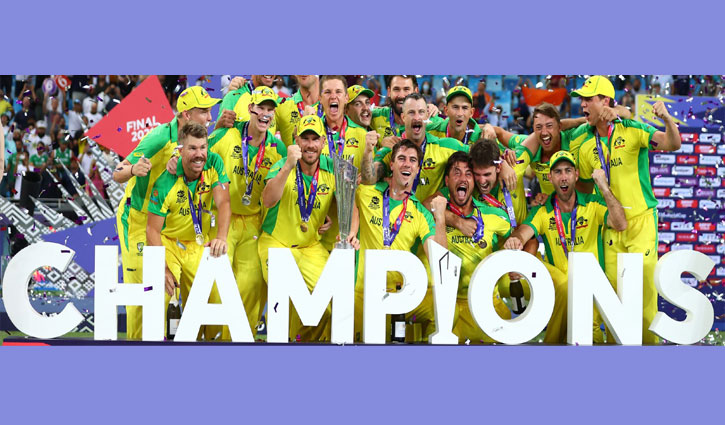 Australia lifted the T20 World Cup trophy for the first time since the tournament’s inception in 2007.

Chasing a formidable target of 173 in the high-octane finale, Mitchell Marsh and David Warner laid the foundation of the historic win with magnificent half-centuries which took away the game from New Zealand’s reach.

The Aussies chased down the target with 7 balls to spare to stamp their authority over neighbours New Zealand. It was the biggest run-chase in the T20 World Cup final history and Australia didn’t find much difficultly doing it.

Marsh remained unbeaten on 77* as his astonishing knock was laced with 4 sixes and 6 four. While Warner was dismissed on 53 runs as he smashed 3 sixes and 4 fours to continue his golden form in the tournament.

Marsh and Warner didn’t allow any New Zealand bowlers to settle on the Dubai track as they took charge over almost everyone from the Kiwi attack. However, Trent Boult castled Warner which pulled him back to become the leading run-scorer of the 2021 T20 World Cup. He finished the tournament with 289 runs in 7 matches, while Pakistan’s Babar Azam topped the list with 303 runs in 6 games.

Meanwhile, Marsh also scripted history in the summit clash as he hit the fastest fifty in the men’s T20 World Cup final’s history. Marsh completed his fifty in just 31 balls as he surpassed Kane Williamson who also achieved the feat in the same clash, by hitting it on 32 balls in the first innings.

The Marsh-Warner duo shared a crucial 92-run stand for the second wicket to put Australia ahead in the chase after skipper Aaron Finch’s early departure on just 5.

Marsh took Australia to win line alongside Glenn Maxwell who also made a valuable contribution with his 28-run* knock. Maxwell with his outrageous switch-hit wrote an important chapter in Australian cricket history.

Earlier, New Zealand skipper Kane Williamson came up big in the final with a crucial 85-run knock to power New Zealand to a challenging total of 172/4.

Williamson finished with 10 fours and three sixes in his 48-ball blitz to lift New Zealand from 57-1 in 10 overs after being invited to bat first.