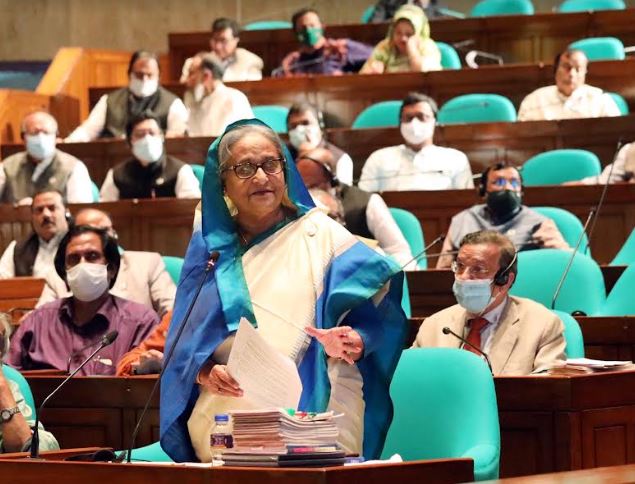 Prime Minister Sheikh Hasina today said construction of the Padma Bridge by own finance has created a perception that “Bangladesh can do” and it has brightened the country’s image globally .

“The most important thing is that Bangladesh can do by own, the perception has brightened its image across the globe. We have done it due to our self-confidence and capacity,” she said.

Construction of the Padma Bridge by own finance has created confidence among the nation, she added.

She made the remarks while joining the discussion on a thanks giving motion placed in the Jatiya Sangsad to greet the Prime Minister for constructing the much-hyped the mega Padma Bridge project under her visionary and bold leadership.

The Leader of the House, Sheikh Hasina said that honesty and people of the country are her strength and she materialised the dream of constructing the Padma Bridge into reality due to that strength.

The motion was later passed unanimously by a voice vote upon discussion.

Chief Whip Noor-E-Alam Chowdhury placed the motion in the House under the section 147 of the rules of procedure.

Sheikh Hasina said the successful completion of the Padma Bridge has been able to create confidence that Bangladesh could implement even larger project in future.

“One decision of constructing the Padma Bridge by self finance—once construction of the Padma Bridge had started, the world becomes aware of and started showing respect to Bangladesh — that had brightened the country’s image,” she said.

She mentioned that the people of the country have gained knowledge over technology (to build such mega bridge), saying, “In future we’ll able to do more improved (bigger) task.”

Coming down heavily on Dr Muhammad Yunus in canceling the World Bank’s funding for the Padma Bridge project, the Prime Minister questioned how a person can make such a big harm to the country just for the lust of a post of managing director of a bank.

She continued that an editor (of a newspaper) was also closely
linked to the matter.

“Dr Yunus and that editor emailed to the World Bank time and again so that funding would be stopped….. Hillary Clinton was engaged in the matter,” she added.

The PM said she, her government and her family members and cabinet members faced tremendous pressure, humiliation and false cases regarding the baseless corruption allegation that ultimately proved false by a Canadian court.

”They thought, we would surrender to them. But, remember that I am the daughter of Father of the Nation Bangabandhu Sheikh Mujibur Rahman. I didn’t and will not bow down my head to any unjust, ” she vowed.

Explaining the rise of project cost in compare with the design taken by the caretaker government back in 2007, Sheikh Hasina said there was no rail line, electricity and gas supply lines in the previous project design.

Besides, the cost against land acquisition in the new design went up three times higher and the amount of acquired land was increased several times.

She also mentioned strong river training and construction of 100 percent bridge with navigation clearance and rise of length of the main bridge as reasons behind the higher project cost.

In his motion, Chief Whip Noor-E-Alam Chowdhury said, “Honorable Prime Minister Sheikh Hasina, daughter of Father of the Nation Bangabandhu Sheikh Mujibur Rahman, should be cordially congratulated and thanked on behalf of the nation through special discussion in the Parliament for her courageous and firm leadership, her unconditional love for the people and giving the nation the Padma Bridge as a gift.”

He said the Prime Minister on June 25, 2022 will open the Padma Bridge, the much desired and the largest infrastructure project in Bangladesh’s history.

“The day will always be remembered as a glorious one in our national life,” he said.

On July 4, 2001, Sheikh Hasina laid the foundation stone of the Padma Bridge aimed at improving the living standards of more than three crore people of the country’s 21 southwestern districts.

“The 6.15-km bridge with four lane highway and one lane railway is a reality today. It is a symbol of pride, self-confidence, ability and self-respect for the Bengalis,” the Chief Whip said.

He said none other than Prime Minister Sheikh Hasina deserves the credit for this achievement as she was uncompromising, steadfast and unwavering like her father in the construction of the Padma Bridge by confronting hundreds of adversities, obstacles, baseless allegations and conspiracies of the World Bank.

“Sheikh Hasina did not bow her head to any pressure that day,” the chief whip said.

He said today Sheikh Hasina has opened the door of immense potential for Bangladesh through successful implementation of the Padma Bridge.

In according with a economic survey, the implementation of the Padma Bridge project will increase at least 1.23 percent growth in the country’s GDP per year, he said.