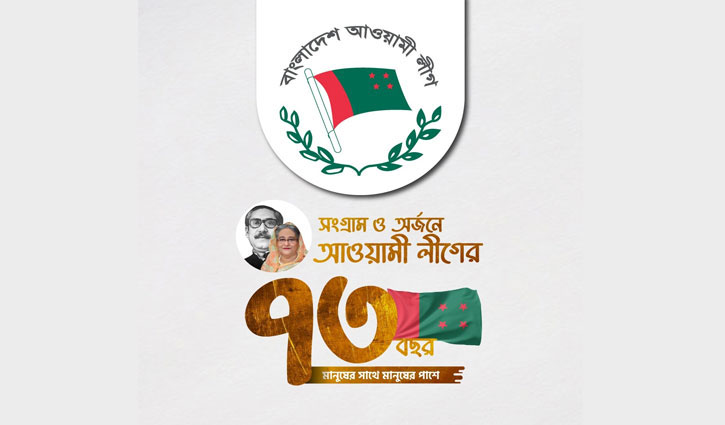 The 73rd founding anniversary of ruling Awami League, which led the country’s independence through the 1971 Great Liberation War, is being celebrated today (June 23).

On June 23 in 1949, a new political party named Awami Muslim League was formed from a meeting of the supporters of Hussein Shaheed Suhrawardy at the Rose Garden situated in KM Das Lane, Old Dhaka.

Coming out from Muslim League, progressive leaders and activists later formed the Awami Muslim League. It was the first opposition party in the then East Bengal (later renamed as East Pakistan).

Maulana Abdul Hamid Khan Bhashani and Shamsul Haq of Tangail became the party’s President and General Secretary respectively while Sheikh Mujibur Rahman was made Joint Secretary from the jail.

In a process of secularization, the word “Muslim” was later dropped from the name of the party.

Bangabandhu Sheikh Mujibur Rahman came to the leadership of Awami League amid 1966 Council.

Later, he became the unparalleled leader of Bangalee nation and architect of independent Bangladesh and Father of the Nation.
Awami League led the Mass Upsurge against the Pakistani occupation force in 1969, prompting it to join the Liberation War in 1971 to free the people from the centuries-old subordination.

Awami League became leaderless after the assassination of Bangabandhu and most of his family members on August 15, 1975 and killing of four national leaders inside the Dhaka Central Jail on November 3 in the same year.

Bangabandhu’s daughter Sheikh Hasina took the helm of Awami League after returning to the country in 1981.

She again united the party. She has been leading the party for three decades and formed the government four times side by side with waging different democratic movements.

After the independence, Awami League was in power around three and a half years before the assassination of Bangabandhu and five years from 1996 to 2001 under the leadership of Sheikh Hasina and since 2009 to present.

In the general election on December 30 in 2018, the people of Bangladesh again gave their absolute mandate to the Awami League to form a government for a record third straight term.

The AL has taken elaborate programmes, marking its founding anniversary with maintaining the health rules due to pandemic COVID-19 outbreak.

Prime Minister Sheikh Hasina has given a message on this occasion.