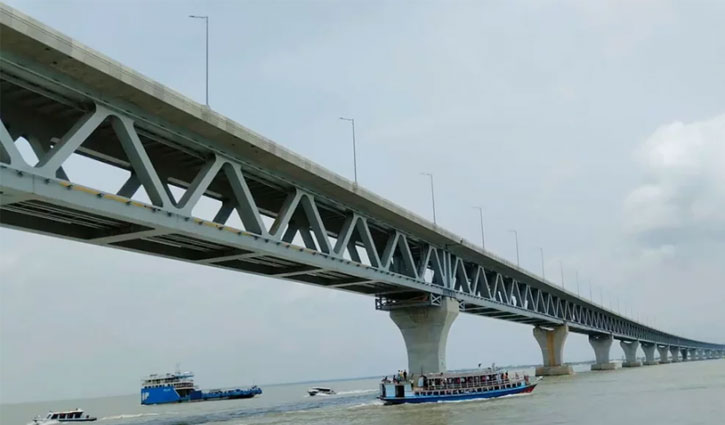 The much-awaited Padma Bridge will be opened to traffic tomorrow (Saturday).

Prime Minister Sheikh Hasina will inaugurate the bridge around 10.00am at a programme to be organized by the government at Mawa point.

Then she will attend a gathering of more than 3500 distinguished guests including foreign diplomats, business leaders, leaders of professional bodies, senior government officials, different political party leaders and civil society members invited to the event.

The premier then will cross the bridge with a motorcade. At Jazira point she will unveil a foundation plaque.

She will also unveil two murals – one for the Father of the Nation Bangabandhu Sheikh Mujibur Rahman and the other of herself – on both sides of the bridge.

After the inauguration, the Padma Bridge will be ready for vehicles to move from Sunday (26 June) morning.

The 6.15-kilometre bridge will connect 21 southwestern districts through roads and railways with the capital and other areas of Bangladesh, creating a new era in the country’s communications and socioeconomic development.

The construction company of the main bridge China Major Bridge Engineering Co Ltd has already handed over the bridge to the Bridge Division.
Both the government and ruling party Awami League have taken all-out preparations to celebrate the day at both ends of the bridge as well as in all districts across the country.

The celebration is expected to be the biggest one the country has ever witnessed.

The ruling party has planned to gather 10, 00000 people at Kathalbari of Shibchar in Madaripur district where Prime Minister Sheikh Hasina will address a rally participated by her party men, supporters and common people coming from 21 southwestern parts.

For the celebration of the programme at Kathalbari of Shibchar a Padma Bridge-shaped stage has been built on the bank of the river.

The Dhaka district administration will hold a laser show in the capital’s Hatirjheel.

The estimated cost for the construction of the bridge is Tk 30,193 crore. The first span of the Padma Bridge was installed at the Janjira point of Shariatpur on 07 October 2017.

This was followed by the installation of the second span on 28 January 2018. The third span was installed on 11 March 2018. The fourth and fifth spans of the bridge were installed on 13 May and 29 June respectively.